Revelation 21 - The New Earth and the New Heaven - Sermon Wilfred 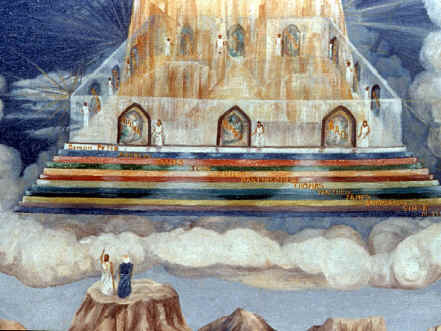 The present earth as we know now, will end. A new earth and new heaven will be created by God (Isaiah 62:17). Without a sea, which I think includes no more oceans. This earth will have a huge size. Why? Because it will have all people throughout the 6000 years from Adam to the 1000-years of Kingdom of Jesus, and perhaps a 1000 years more if children will be born in this Millennium. We cannot image who will live on this New Earth. At least the Israelites who repected the law of God and all who did not accepted the mark of the beast during the Great Tribulation. Yes, all whose names are written in the Book of Live. But who they are, would be pure speculation.
John sees a new Heaven, but does not continue to give any information about the New Heaven. The information which we receive is limited to the New Earth and in more detail of the New Jerusalem.
The New Jerusalem is coming down out of (the old?) Heaven from God (the Father), prepared as a bride. We know that Israel is called the bride of God (Isaiah 61:10, 62:4-5), so are speaking of God the Father? Because verse 3 says:

Behold, the dwelling of God is with men. He will dwell with them, and they shall be his people, and God himself will be with them

Verse 4 All sadness is definite past tense. Death is no longer present, therefore no more mourning. Every one on the new earth has eternal life.

It does NOT speak of Jesus, not of the Lamb. Although verse 6 speaks of the Alpha and the Omega, Jesus is the living water. For me it is hard to conclude of whom we are speaking here. My opinion is that God the Father will live on the New Earth, while Jesus with His Bride remains living in the New Heaven. But this conclusion is not possible when one reads verse 22. Because what would be the purpose of a New Heaven if no one is going to live there?

Verse 7 He who conquers reminds us of the seven letters in Revelation 2 and 3 with the promises made to the ones who conquer. Galatians 4 speaks of the inheritance and Gal. 4:6 says that the mature Christian is a son of God, and says "Abba, Father".

Verse 8 Repeats Revelation 20:11-15: The destiny of all wicked persons is the lake of fire, which is the second death. Why second death? The first death is on earth, the end of suffering. The second death is a real death, namely an eternal suffering with fire (radiation?) and sulphur. Sulfur is quite irritating on the lungs and causes difficulties to breathing. Think about a vulcano eruption.

We have no clue why it is one of the seven angels of the seven bowls who is taken John to show the new Jerusalem coming down from the (old?) Heaven. In the following verses follow a description of the new Jerusalem. The new Jerusalem is the glory of God, shining like a pure diamante and jewel. Why it has a wall and gates, we do not know. In the old days, the wall and gates served as a protection against enemies. On the new earth there will be only peace. Possible it is a reminder of the old earth and old Jerusalem. Each gate has an angel for the protection that nothing unclean shall enter her (verse 27).
The size of this new city, we cannot image, perhaps the length and width of 2.200 kilometers (12000 stadia) (Distance Amsterdam to Moscow, or Amsterdam to Istanbul), but the height of 2.200 km is gigantic. Would you like to live on the top floor of a skyscraper of 2.200 km? And that is just a single city. So can you image how huge the new earth will be?
The wall is 64 meters which is possibly the width of the wall.

For me, this verse 22 is very strange: the new city has no temple. The temple is Lord God the Almighty and the Lamb (Jesus Christ), meaning that Jesus Christ is not in the New Heaven. So what is the purpose of the new Heaven? The Bible does not tell anything about it.
Looking to Moses who was unable to see God, and the Israelites could not face Moses after he came down from the mountain, after speaking with God. So clearly the new city does not need sun or moon for God is its light. Its lamp is the Lamb, I think the explanation is that it is the Word of God by which the nations are instructed and walk. Jesus and the believers who reign with Him as king, they will instruct the nations and people of the commandments of God.

The gates will never be shut because there are no enemies who will attack the city. People from all over the earth will travel to Jerusalem to bring glory and honor to God.

Who may enter in the New Jerusalem?

Verse 27 I found no explanation, nor do I myself have an explanation. Who are the unclean persons who practices abomination or falsehood? Only those who are written in the Lamb's book of life are able to enter. But Revelation 20:15 if any one's name was not found written in the book of life, he was thrown into the lake of fire. So how can an unclean person live on the New Earth? I have no answer.