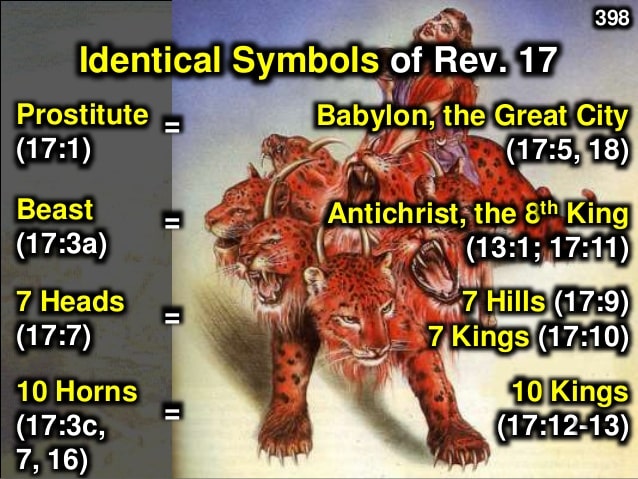 Are we able to explain?

I have searched the Internet, read commentaries and I do not have an answer. So let us have a look at the various interpretations. And why I disagree with them. Because one HAS to take notice of them.

The 10 nations of the Beast spoken in Revelation 17 and Ezekiel 38 will unite having the same mind or belief (Islam).
1. Gog 2. Magog 3. Rosh 4. Meshech 5. Tubal 6. Persia 7. Ethiopia 8. Libya 9. Gomer 10. Tarshish
These 10 nations where once located in the territories of the following Islamic nations; Turkey, Syria, Jordan, Iran, Iraq, Sudan, Egypt, Libya, Afghanistan, Uzbekistan, Turkmenistan, Tajikistan, Kyrgyzstan and Kazakhstan.
This is the next world order, and an Islamic Union that will bring great persecution against Christians and Jews. This event is known in the Bible as the Battle of Gog and Magog or Armageddon

This one is not possible because Jordan, Arabic Emerirates and Egypt are making peace with Israel, They are part of the peace in Ezekiel 38. The other countries mentioned are part of Seba and Dedan (including Russia) in Ezekiel 38:13 Sheba and Dedan and the merchants of Tarshish and all its villages will say to you, 'Have you come to seize spoil? Have you assembled your hosts to carry off plunder, to carry away silver and gold, to take away cattle and goods, to seize great spoil?' This spoil is the richness of gass and oil which Israel has found. And this war we are now approaching, according to the converted Jew Amir (see YouTube "Behold Israel"). Ezekiel 38:14 "Therefore, son of man, prophesy, and say to Gog, Thus says the Lord GOD: On that day when my people Israel are dwelling securely, you will bestir yourself. Nowadays Israel is dwelling securely, making peace with the Arabic countries and Libanon. According to Amir this war will take place BEFORE the Great Tribulation. In that war Israel will not need to fight, but God will send a great earthquake (Ez. 38:19) and the mountains will fall upon them (38:20) with torrential rains and hailstones, fire and brimstone (vs 22). It will be God Himself Who will destroy these nations. And that might lead to the peace brought by the AntiChrist, the start of the Great Tribulation and the temple to be built in Jerusalem.

The Pope will be the AntiChrist? 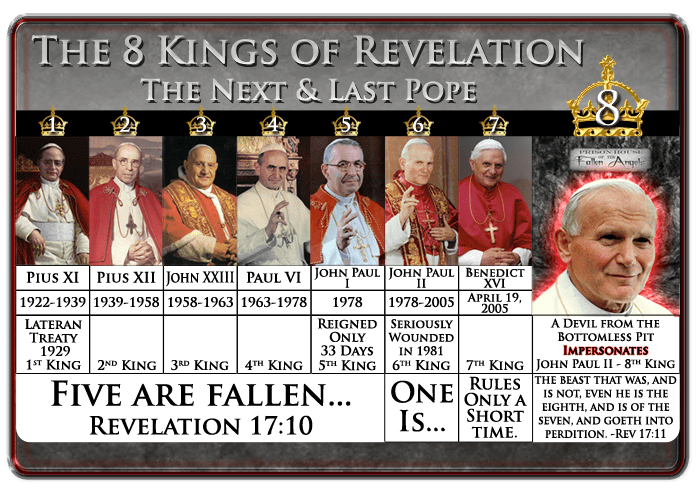 The Pope is not a king and single. Here in Revelation is spoken about 10 kings. So more likely "kingdoms" in Europe.

The United Nations is the Beast?

The Beast 666 (United Nations) is an insignificant beast subservient to the Red Dragon (United States of America) that gives it power and provides the home (New York) and money.
The United Nations is powerless, falling apart, the U.S.A. is less financially supporting. With all what is going on with the destructive demonstration it is clear that as soon as the democrats come into power, the U.S.A. will be of no world significance any more. Remember that the Bible does NOT speak of a wolrd nation which come to help Israel, but it is God Himself Who fight against Seba and Dedan. The following is interesting.

The AntiChrist comes from America? 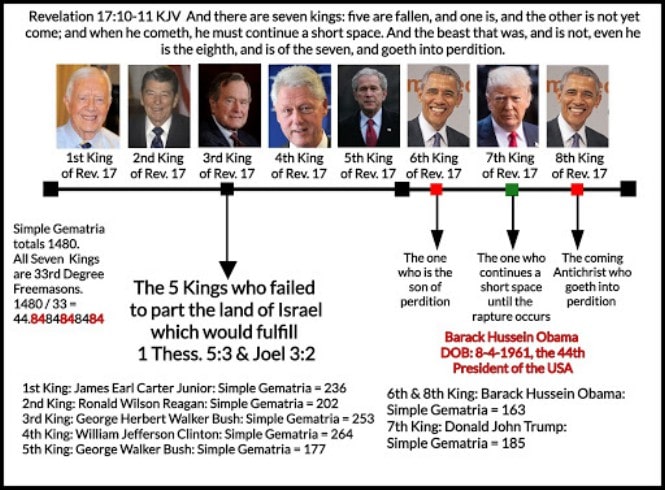 In this picture it shows that Donald Trump will be elected again and will be president until the Rapture of the Chruch, THEN the democrats take over the power. That makes sense, because many members of the congress and senate are Christians, many respects the American constitution, the laws of God (Moses) and have respect for life. This in contradiction of the democrats who wish to get rig off the American constitution and away with Israel. So after the Rapture of the Church, the state Israel can no long depend upon the United States of America.
U.S.A. will play no longer an important role. And as explained earlier, most likely complete North and South America will be destroy during the first trumpets (Revelation 8).

The AntiChrist HAS TO BE A JEW?

Yes, the AntiChrist has to be a Jew, because the Jewish people will NEVER allow a NON-JEW to enter into the rebuild temple in Jerusalem. Therefore the events has to take place in Europe.

The judgment upon the great harlot

In the Old Testament, the metaphor of adultery was frequently used of Israel as God's faithless wife, turning to worship other gods (Isa. 1:21, Ezek. 16:15) as well as commercial gain. Here it is Babylon as a symbol of human civilization with all its lust for richness, wealth, luxury and against Gods laws and order. Offering babes and children to satan (abortion, euthanasia).
The great harlot who is seated upon many waters. That cannot be the city of Rome, for while the Tibers flows through the city, Rome is NOT built upon waters (Vatican City). One needs to think about a city like Amsterdam built on pillars with its many canals and Berlin built on a swamp.

Verse 2 The old Babylon seduced the old world into its fornication. The AntiChrist will seduce the COMPLETE world in everything against God, seduce may people on earth and force to worship the Beast and to accept the mark.
John is carried into a wilderness, which could mean an uncultivated region with few people. And he saw a woman sitting on a scarlet beast. Scarlet indicating the intimate relationship with its master satan. So this wilderness we can see as the occult place, the deep inner relationship of the woman with satan. While on many waters we can say the openly relationship with the many nations on earth.
Full of blasphemous names, a reference to the self-deification of the AntiChrist and his demand for the worship of his followers.

The woman was arrayed in purple and scarlet, full of luxury. The woman is showing her wealth to the world. Purple and scarlet were in the old days very costly and could only be afforded by very rich people and kings. Desire for this, entice men away from God.

Verse 5 Her name of mystery. The mystery that in her title is included her object: the abominations and the impurities of her fornication to lead people away from God and the AntiChrist to be worshiped as god. It shows her drunkenness through the blood she drunk of the saints she murdered.
Verse 6 John marveled greatly, a better translation is John was greatly amazed. The angel asked him, why are you amazed? And tells him that he will explain the mystery of the woman AND the beast. SO here we see the close interrelation between the two. It is one mystery: the civilization which supports the Beast. The beast passes through three stages: it was, i.e. it had an existence in the past; it is not, i.e. there is a time it does not exist; it is to ascend from the bottomless pit and go to perdition, it will have a future manifestation which will be satanic power. The bottomless pit is the home of satanic power before it enters on earth (Abyss, but is not hell). Matthew 8: 28-34 The evil spirits ask to be allowed to enter in the swines and they fall into the sea (abyss), for they do not wish to be tormented before their time. Before their time: That is the eternal punishment in the lake of fire.
With my introduction, I mentioned several explanations, which can be very dangerous, due to their wrong interpretations. I think the most save is that the was is the Roman Empire which ended in 478 A.D., it is not the Roman Empire did not exist until the "European Union" and it is to ascend will be the "European Union" which WILL ascend in the Great Tribulation.

It is wrong to align the five fallen kings to the Popes or the United States presidents, as explained in my introduction. Surely what will happen after the Rapture of the Church, we can only guess. It will be chaotic, the Church, the Restrainer, is no longer on earth, so all evil forces will come to power and no respect for life and God's laws will be there. In my opinion the United States will play no role anymore and the focus will be shifted completely to Europe. The Turkish and Iran war might occur and the intervention of God of Ezekiel 38-39 might occur. Thereafter the "peace" of the AntiChrist with these seven kings. The people in the Great Tribulation will know! In the end these kings will give their power to the Beast, verse 13. Whether we have to take the ten kings literally, I do not know, or as some say it represents fullness of ten meaning the complete earth. These kings are not important, only allies of the Beast who seek their complete devotion in the Beast.

Verse 13 Now we jump to the end of the Great Tribulation and go to the war of Megiddo (Rev. 16:16) and the Second Return of Jesus on the Mount Zion (Zechariah 14), where all Jews and Israelites will SEE HIM whom they have pierced (Zechariah 12:10) and ALL ISRAEL will be saved (Psalm 130:4, Rom. 11:26).
The complete earth in worship of the Beast, peoples, multitudes, nations and tongues will raise and fight against the Lamb and the LAMB WILL CONQUER them. For it is God Who have given them over to their lusts and now are of one mind with the Beast.

Verse 18 gives a symbolic interpretation of the woman, she is the great city which has dominion over the kings of the earth.