Revelation 13 The second beast and the lamb with two horns, the mark 666 - Sermon Wilfred 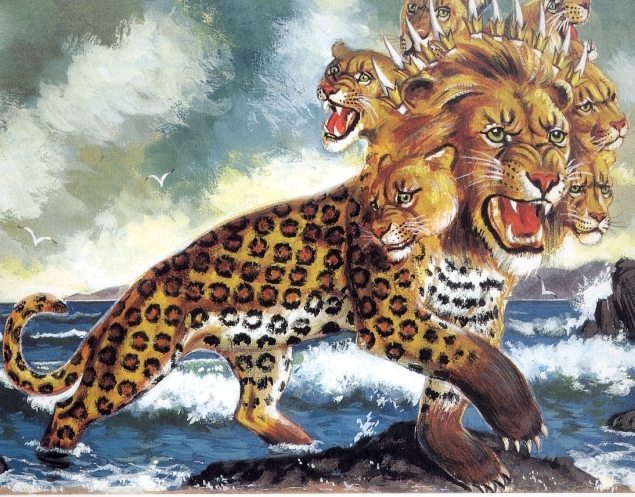 In Daniel 7 he saw four great beasts coming out of the sea. The first was a lion with aegle wings, the second like a bear, the third like a leopard with four wings, the fourth beast was terrible, dreadful and exceedingly strong with a great iron teeth and it had ten horns. Therefore I think this beast in Revelation is this last beast of Daniel. As said in chapter 12, these are likely seven nations coming out of the European Union. A clue might be Revelation 17:15 The waters that you saw . . . are peoples and multitudes and nations and tongues. The ten crowned horns of the beast, however, do not play a significant role. Today the European Union is not very solid. The major roles are French and Germany. The first sight might be the past historical Roman Empire of the first century and the seven heads will be the new Roman Empire which is to come in the Great Tribulation.
It is the dragon satan who give the power to this beast. The blasphemous name is upon each of its heads. Daniel 7:25 says

So we are now in the last 3 1/2 years of the Great Tribulation. Let us examine the word blasphemous name. 2 Thess.2:3-4

Let no one deceive you in any way; for that day will not come, unless the rebellion comes first, and the man of lawlessness is revealed, the son of perdition, who opposes and exalts himself against every so-called god or object of worship, so that he takes his seat in the temple of God, proclaiming himself to be God.
Matthew 26:64-65 Jesus said to him, "You have said so. But I tell you, hereafter you will see the Son of man seated at the right hand of Power, and coming on the clouds of heaven." Then the high priest tore his robes, and said, "He has uttered blasphemy. Why do we still need witnesses? You have now heard his blasphemy.

Blasphemy is all what goes against God. Jesus is accused of blasphemy, because He is seated next to God the Father. Calling Himself having Power like God and not being human. Blasphemy is putting aside the laws of God. This happened in France. The French government accepted the law of abortion up to 9 months. They are making crime lawful. One law says killing a person is murder. However, a child of 9 months (from 6 months) is capable to live without medical assistance, so now by law it is lawful to kill a person of 9 month. The pharmaceutical industry needs babies of 9 months to perform their testing. Aborted persons of 8-9 months are alive when they are aborted, and use in the church of satan to sacrifice. By French law that is no longer crime, but allowed under law. The democrats in the U.S. wish the same. The left wing in Brazil wishes the same. Completely putting God's law aside, and making crime lawful. That is what is meant by blasphemy. In the near future we shall see more and more these kinds of changes occurring. What is forbidden by law, will be made lawful by another law. More and more blasphemy will be approved.
In 81-96 A.D. the empire Domitian demanded to be addressed by the title Dominus et Deus, Lord and God. So will the AntiChrist. The one dollar bill in the United States has already the symbol of the Pyramid and the third eye, satanic symbolism.
The dragon gives his power and his throne with great authority. Meaning it is not just military, it is complete political, law and military power. Full control over citizens and religion.

One of the head of the beast is mortal wounded. Likewise in Revelation 17:8 The beast that you saw was, and is not, and is to ascend from the bottomless pit. The Roman Empire in the first century was and at present is not. But it will ascend again, the Roman Empire is ascending again with the European Union and curing from is mortal wound.

Verse 4 gives the objective of the whole: Worshiping the dragon, turning people away from the worship of God, the Creator. It is the dragon satan who wish to be worshipped and getting all glory. He is allowed by God for 42 months. God is limiting his time. People are getting a free choice to worship satan or God their Creator. The dragon and the beast will speak blasphemies and perform blasphemy's acts.
God PERMITS persecutions against the saints who keep the commandments of God and bear testimony to Jesus (12:17). God PERMITS that these saints will be tortured and killed. They will be resurrected and have new life on the New Earth. So their dead is terrible but gives an end to the torture and life with God. This persucution is not limited to Europe, but given to every tribe and people, meaning the complete earth.
All people on earth will follow the dragon and the beast, all those whose name is NOT written in the book of life of the Lamb, see 20:11-15. So people have no free choice? It is already predestinated by God, who will worship satan and who will worship God? NO, God has knowledge of the future. He knows in advance who will chose for Him and who will chose for satan. Due to this knowledge the names are written in the book of life and due to the endurance of this people, the name is in the book of life.
Here is a clear warning in verse 9: If any one has an ear, let him hear. God is warning today. God has warned with the previous plagues in the preceding chapters. God has shown HIS POWER. Now He is telling: any one who is taken captive by the dragon and the beast, he or she will be slain by the sword, meaning torture, and must endure until death. 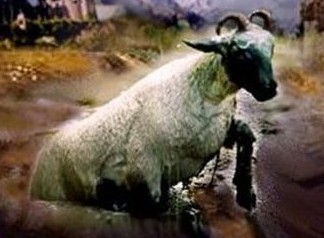 Verse 11 Another beast, an imitation of the Lamb Jesus, rise out of the earth. In Daniel 7:3 the four beasts rise out of the sea, here out of the earth. But this lamb is not Jesus, it has two horns and speaks like a dragon. It is prostituted religion. The appearance is like a lamb, but it is worship to satan and complete destructive. It represents religious power to support civil power. This second beast is no competitor of the first beast, but a faithful supporter. It works great signs as if he is God. He is allowed by God to give breath to the image of the beast and to speak. Well, nowadays with all artificial intelligence we do not need to be surprised about that. Many will be deceived, and many will worshipped the image.
Suprised that men will worship and follow a beast as world leader? Remember Eve in Paradise, she gave more attention to the speaking serpent than to the commandments of God. She listened to the speaking serpent and ate of the forbidden fruit. So no surprise at all that men on earth will follow and worship the speaking beast.

Look what is happening today with Covid-19. One will be obliged to vaccinate against Covid-19 or one will not be permitted to a country or to participate in certain activities. Then one will be obliged to accept the mark of the beast on the right hand or forehead, if one wishes to buy or to sell. Tests are fully in progress with the chip in the hand to be used at money machines. Also chips with all your personal data as birth date, social and tax number, your health state and much more.
Verse 16 It is for every body, rich and poor, both free and slave, also the poor, the beggar who sleep on the street.

However, if it will be a real chip, it might be. But a huge software company is involved in the development of a vaccine which give a mark as well and CHANGES YOUR DNA. No surprised need to be that the number 666 is involved. Changing your DNA, means that you no longer belong to God, but your DNA is changed and irreversible belong to satan. Therefore tattoo is not innocent, it involves blood changes. Tattoo is telling I am not pleased with my body created by God. You are giving an opening to satan.
In November 2020 will be the world meeting of countries discussing the virtual money, away with real coins and notes. The preparation for one worldly virtual money. So yes, we are living close to the Great Tribulation and Revelation will BE FULFILLED.

Watch my video of Behind Covid-19 and 5G.

The saints are sealed by God on their forehead. Might be a visible mark, or like the Christian is sealed by the Holy Spirit. Satan wishes to imitate with a countermark. Verse 18 calls for wisdom: calculate the number of man. The number of man is 6, triple 6 is complete human, so 666. Which already is in many satanic organizations the number. God is perfect, His number is 7. A number mankind will never reach, because man is a sinner and imperfect. The closest man can get is 666. One does not need to be surprised about that marking. The Jews were branded in the concentration camps with a mark on their arms.

We cannot deny the facts. We are rapidly approaching the completion of the things described in Revelation. A few years ago, it all might have sounded science fiction, now before our eyes it is becoming realaty when you are willing to investigate on the internet and read books.
Avoid this horror by accepting Jesus Christ as your Savior and Lord.