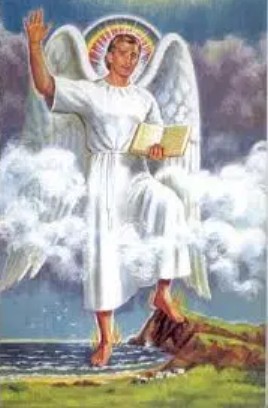 The chapters 10th and 11th are again an interval before the seventh and last trumpet is explained.
Although you may think that the description of the angel given in verse 1 is out Lord Jesus Christ, he is NOT. Because in verse 6 the angel swore by Him who lives or ever and ever, who created the earth and what is in it. So the angel swore by the Creator, the Lord Jesus Christ.
The rainbow refers to the covenant made by God when God swore never to destroy the earth again through a flood. His face was like the sun and his legs like pillars of fire. The sun is enormous heat and radiation. So this judgment has to do with heat, radiation and fire. However, we do not know, because it is not explained and although it is told to John, this judgment is sealed in verse 4. Most likely this book will be found in the Great Tribulation. We do not need to be surprised because the Dead Sea rolls were found in 1947 and we know in 2020 what is written in it. So without doubt this book will be found and revealed in the near future.
This little scroll, which is NOT the scroll in Revelation 5 the Greek word is different, has more judgments for the COMPLETE earth. The complete earth, because the angel set his right foot on the sea, and his left foot on the land foot, therefore including all oceans and all countries. The little book has similarities with the book of Ezekiel 2:9, 3:1-3 "Then I ate it; and it was in my mouth as sweet as honey". The Word of God is sweet to hear, it brings GOOD NEWS, but in verse 9 and 10 of Revelation 10 in the stomach it makes bitter: the Word of God is ALSO judgment for those who rejects the Bible, who rejects the Love of God, the salvation through the Lord Jesus Christ.
The angel called out with a loud voice, like a lion roaring. This does not mean that the angel uttered inarticulate words, but the sound is very loudly. If this mean that the persons on earth will hear this voice at the end of the Great Tribulation, the Bible does not tell. It is clear that what the seven thunders spoke, is understandable by John, but thereafter he needs to seal what he heard.

The lifting of the right hand was a familiar gesture when taking an oath (Deut. 32:40; Daniel 12:7). The angel swears by the Creator of heaven and earth. There will be no more delays in the days of the trumpet sounded by the seventh angel, meaning in the period of time, the time of the seven bowls, Revelation 16. There will be no more time intervening the coming of the end, that is the end of the human and satanic ruling on earth. Jesus Christ is coming soon to take over the reign on earth.

Verse 8 John is told to take the little scroll from the hand of this angel and to eat it. Some say that figural this little scroll is the Bible which brings the Good News, sweet as honey in your mouth, but bitter in your stomach that is the judgment about men who reject the Word of God.
Verse 11 John must again prophesy, that is he already spoke about the seven seals and six trumpets, but again he will prophesy about the seven trumpet and its seven bowls. He will reveal more about what is going to happen at the end of the Great Tribulation.