Why are you a sinner and do you need Jesus Christ?

In my introduction I talked about people coming forward upon the invitation in the church or evangelism to accept Jesus without actually being aware of the meaning. You may have grown up in a Christian family. But do you know the reason why man is a sinner and why one needs Jesus Christ as Savior?

Man is a sinner

Man is a sinner because one is born as a sinner. We have to go back about 6,000 years for that when the fall occurred. The Bible begins in Genesis 1 verse 2 with

Pay close attention to the earth already existed! The earth NOW was without form and void. My thought is that this savage is a result of the battle between God and satan. Satan wanted to be equal to God and satan lost this battle and was cast out of Heaven. Possibly the earth (and the universe) was destroyed thereby.
God begins with a NEW beginning, where AGAIN He created with plants, birds, animals and fish. And finally, man is created in Genesis 1:26

And the Lord God commanded man: From all the trees in the garden you may eat freely, but from the tree of the knowledge of good and evil you shall not eat of it, for in the day that you eat of it you shall surely die.

God gave man an ORDER: of all the trees in this garden of Eden, paradise is a very vast area greater than the present Israel, you may eat, HOWEVER of 1 fruit tree but you may NOT eat. A test of obedience and respect for God, the Creator. Satan could not bear that God had created everything again, and wished to destroy this new creation including man. In his rebellion against God, Satan had dragged 1/3 of the angels, the fallen angels, or demons. 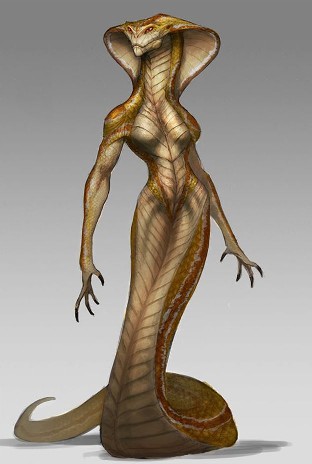 They have no body and to make themselves visible, they need the body of an animal or human. Satan entered the body of a snake and spoke with Eve. Eve was not on her guard, an animal that spoke? A very strange thing! Possibly the snake could walk and they walked together to the forbidden fruit tree. Why wasn't Eve with her husband Adam? Satan spoke with Eve with half truths. Eve was tempted and fell into the trap of the speaking serpent, the wish of satan now being proposed to Eve to be equal to God, no authority above her. Is that not typical of the current person, no authority above him or her, governments who put themselves above God and adopt laws that go against God? Eva ate from the forbidden fruit tree. She went to her husband and offered him the forbidden fruit.
NOW Adam had a FREE CHOICE, not a temptation but a CONSCIOUS choice. Or choose his wife and disobey God. Or refuse the forbidden fruit and be obedient to God. He knew that his wife had chosen for death, for God had said that you will surely die.
Adam chose to eat the forbidden fruit, a conscious choice, and with that action, sin entered into the world. Disobedience to God. It is through this conscious choice that sin is passed on through the MALE seed and NOT through the female egg. The woman was seduced so that the virgin woman does not pass on sin. At the time of intercourse, male and female become 1, fertilize the sinful male sperm the egg cell, and become 1, so sinful. And from this conception a sinful man is born.
Adam and Eve became aware of their nakedness and took leaves from the fig tree to cover their nakedness. 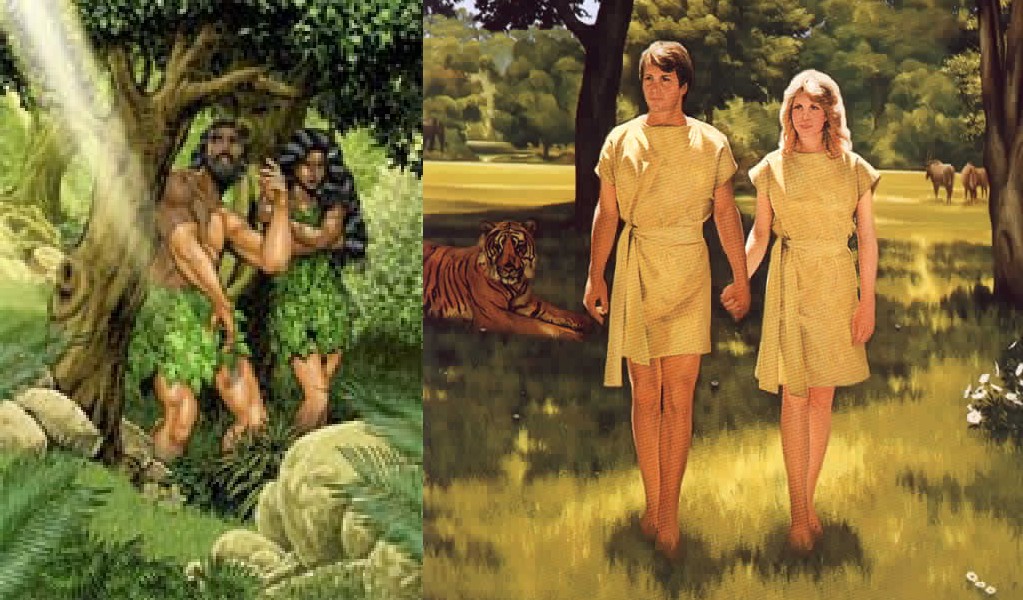 Fig leaves which wither and show their nakedness again. God knew what had happened and waited until the evening to visit Adam and Eve. He gave them TIME to formulate their answer to God. God visits them in the evening. They have hidden themselves, they are afraid of God. The God with whom they previously freely communicated. Adam has had time, a day, an afternoon to think of his answer to God. And hear the answer, he gives GOD THE GUILT: The woman you gave me, let me eat the forbidden fruit. No repentance, no acknowledgment of debt, but shifting the debt. Isn't that typical human? Man is guilty. What does the Bible say

That meant that God took an INNOCENT animal(s) and killed it to make clothes to cover the nudity of Adam and Eve. 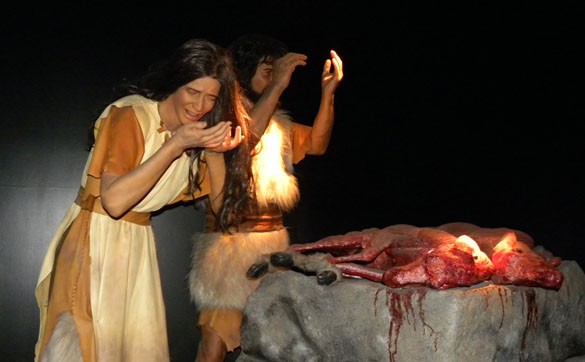 Innocent blood was shed for the sinful man. How often are not the innocent victims of someone else's fault? The driver who drove through red light and injured or killed people. The drunk driver who kills children. They are conscious choices, because the person knows the possible consequences of his or her act.
After God made clothes for Adam and Eve, God removed them from paradise. Their spirit with which they could communicate with God is immediately taken away. The promised death. And eventually they will also die physically. Also no more face to face meetings with God. End of story?

Yes, God loves man, but is also JUSTICE. God CANNOT tolerate sin and sin has to be punished by death. Every person dies on earth, but every person has eternal life either with God or without God. The first man Adam was given time to formulate his answer to God. Every person personally has a short or long life on earth to VOLUNTARY make his or her choice:
Recognize God, acknowledge being a sinner and unable to receive forgiveness through their own means.
Or reject God, say by living well and doing no bad things, then bear the penalty of sin, to receive eternal death, and to remain eternally separated from God. It is up to each person personally to choose. The first person Adam had free choice. But there is a consequence to each of the choices and the individual will have to bear the consequences of his or her choice.

How much does God love man?

The Son of God was willing to take upon Himself the penalty of sin. 4000 years later, He left His wealth in Heaven and was born on earth as a human child. How? Sin is passed on through the man, so birth must take place through the sinless female egg, a woman who is a virgin, who has not yet become one with a sinful man. The Virgin Mary was willing to conceive the Holy Spirit. In spite of the fact that she KNOW that this meant under Jewish law that she could be stoned to death (becoming pregnant while not having had intercourse with her betrothed husband). She fully TRUSTED the angel of God who brought her the message that she would stay alive and give birth to a child. She OBEYED the commission of God.
Jesus was born as a baby on earth without sin. Despite His awareness that He was the Son of God. His entire life consisted of SUBMISSION and Obedience. NOT GIVING IN TO TEMPTATIONS.
Why had Eve fallen? Precisely, because of temptation. Jesus' test consisted of DAILY temptations. The temptation to raise Lazurus prematurely from the dead. The temptations of satan. Jesus spent forty days in the desert where he ate nothing. 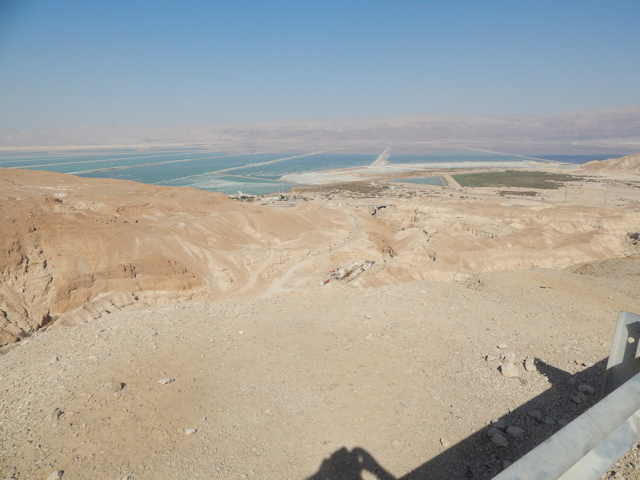 Whoever has visited Israel knows how desolate the desert is by the Dead Sea, the area where Jesus stayed immediately after His baptism. After not having eaten for forty days, the devil comes with three temptations, and this time satan quotes the Words of God correctly, however, out of context. Jesus does NOT fall into the trap of satan and quotes with correct Bible texts in their context.
I think the greatest temptation of Jesus was at the Cross of Golgotha. Although at the Cross, the people taunted and challenged Him to get off the cross, Jesus remained on the Cross and did not ask for the help of God's angels. There He took upon Himself the punishment of God on the sins of man. Adam and Eve were the first to be tempted. Jesus endured thousands ? of temptations and remained obedient to the Will of God the Father. That is the meaning of that Jesus is the Savior from the punishment of man's sin. The soldier pierced the side of Jesus with a spear (John 19:30, 33-34) and at once there came out blood and water. With that His death was confirmed medically, see IT IS FINISHED.

It remained by the death of Jesus?

No Fortunately not. God the Father accepted the finished work of Jesus and the proof of that is that God raised His Son Jesus from the dead. This opens the way for EVERY person who wishes to believe in Jesus Christ as his or her Savior. BUT it is again the FREE PERSONAL CHOICE. Man can accept this offer from God the Father and obey this call, OR man can reject this offer. Accepting means eternal life with God. Rejecting means accepting yourself the punishment for sin and eternal death in darkness.

But the person who accepts Jesus Christ thereby chooses to live for God and that GIVES OBLIGATIONS.

What happens to the person who accepts Jesus Christ as Savior?

The person who accepts Jesus Christ as his or her Savior is born again. 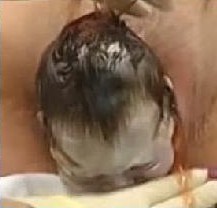 That man is leaving to be a child of satan, the sin-born man, over to BE A CHILD OF GOD, that is to be born again as a child of God. One is included in the family of God. And that person receives new life and immediately receives the Holy Spirit. The Spirit that was taken away from the sin of the first man Adam. Through that Spirit the believer is able to read the Bible, pray and do what God wants. The means of communication, the spirit, is present again with which one can communicate with God.

HOWEVER, being accepted into the family of God, the childhood of God, involves obligations. The Jewish people were (and are) the chosen people of God, called to fulfill the Will of God, and for this the Torah was given (including the 10 commandments). They left their God, they bowed down before wooden and molded statues, and God banished them from the Promised Land. Choices have consequences. Their spiritual leaders rejected Jesus as Savior. and TEMPORARILY came and is the Church of believers, whose task now is to obey the Will of God and to proclaim the gospel. That is a daily free choice, several times a day as Jesus was tempted.

In my next preaching more about the Christian life.